What Is a Diverse Supplier?

MBE Certified Diverse Supplier: What Does It Mean? 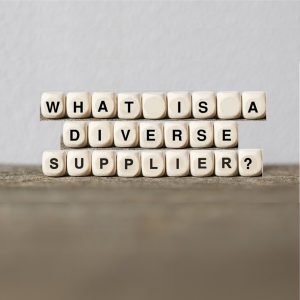 You may have heard these terminologies but have never investigated them further.

The National Minority Supplier Development Council (NMSDC) is one of the country’s leading corporate membership organizations.  Their mission is to advance business opportunities for certified minority business enterprises (MBEs) and connects them to corporate members.  As a nationally recognized third-party certifier, it ensures that businesses are appropriately categorized.

MBE stands for Minority Business Enterprise.  According to the National Minority Supplier Development Council’s website, www.nmsdc.org, their Minority Business Enterprise members are United States citizens who are Asian-Indian, Asian-Pacific, Black, Hispanic and Native American. Ownership by minority individuals means the business is at least 51% owned by such individuals or, in the case of a publicly owned business, at least 51% of the stock is owned by one or more such individuals (i.e., the management and daily operations are controlled by those minority group members.)

For purposes of NMSDC’s program, a minority group member is an individual who is a U.S. citizen with at least one quarter of the following:

A U.S. citizen whose origins are from the Asian Indian region. These countries include Bangladesh; India; Indonesia; Nepal; Pakistan; Sri Lanka.

A U.S. citizen whose origins are from the Asian Pacific region.  These countries include the following: Cambodia; China; Guam; Japan; Korea; Laos; Malaysia; the Philippines; Samoa; Thailand; Tibet; Taiwan; the U.S. Trust Territories of the Pacific or the Northern Marianas; and Vietnam.

The Caribbean Basin only, Brazilians (Afro-Brazilian, indigenous/Indian only) shall be listed under Hispanic designation for review and certification purposes.

A person who is an American Indian, Eskimo, Aleut or Native Hawaiian, and regarded as such by the community of which the person claims to be a part.

Native Americans must be documented members of a North American tribe, band or otherwise organized group of native people who are indigenous to the continental United States and proof can be provided through a Native American Blood Degree Certificate (i.e., tribal registry letter, tribal roll register number).

WHAT IS A DIVERSE SUPPLIER?

Not all diverse suppliers are equal.  Some are simply classified as a diverse supplier, while others are certified.  Certification is a verification process through a third party that establishes the business as diverse-owned, which is generally more desirable in a supplier.

Many major corporations as well as both the state and federal government have set aside business for diverse suppliers. Within those organizations, they have supplier diversity programs that focus on spending a percentage of business with diverse suppliers.

WHY IS SUPPIER DIVERSITY IMPORTANT?

The U.S. Senate Committee on Small Business & Entrepreneurship’s post under Minority Entrepreneurs, states that the number of businesses in our minority communities continues to grow, adding to our competitive advantage. They state that over the last 10 years, MBEs accounted for more than 50 percent of the two million new businesses started in the United States and created 4.7 million jobs.  They calculate there are now more than four million minority-owned companies in the United States, with annual sales totaling close to $700 billion.  Diverse small-business ownership is essential to our nation’s continued economic success and growth.

The United States Census Bureau’s article titled, Annual Business Survey Release Provides Data on Minority-Owned, Veteran-Owned and Women-Owned Businesses, published January 28, 2021, released new estimates on the characteristics of employer businesses (those businesses with paid employees).  According to the 2019 Annual Business Survey (ABS), covering reference year 2018, approximately 18.3% (1.0 million) of all U.S. businesses were minority-owned and about 19.9% were owned by women.

Supplier diversity programs encourage the growth of these diverse businesses.  Their programs can help them overcome barriers that challenge their startup and sustainability efforts by providing a steady source of income which creates jobs. Additionally, some programs even help diverse business gain access to much needed capital to help them expand their business and offerings.  Supporting diverse businesses helps to uplift their communities through tax revenue, job creation, increased wages, promotes new and exciting ideas, and contributes to providing hope for every individual to reach their full potential.

HOW DOES POLYFAB DISPLAY COMPANY FIT INTO SUPPLIER DIVERSITY?

Polyfab Display Company is an award-winning Minority Business Enterprise.  Polyfab holds diversity certification as an African-American|Black through the NMSDC, SWAM, and SAM.  Established in 1987, Polyfab has focused on providing quality displays, store fixtures, signage, and protective products primarily fabricated from Acrylic and a variety of other plastics such as Polycarbonate, PETG, ABS, PVC, and HDPE.  Our clients are from almost every industry and are headquartered across the United States.

Al Parker, President of Polyfab Display Company, is a native of DC.  Owning Polyfab Display Company has allowed him to employ people from a wide range of nationalities, including Filipino, Latino, Vietnamese, Chinese, Pakistani, Indian, Nigerian, Ethiopian, Caucasian, and others, creating a diverse workforce.  Polyfab has made a difference in Prince William County, VA by creating jobs and adding to the local economy.  Polyfab has also donated scrap materials to schools for vocational training programs.  One of his favorite projects is “Gospel Invasions” in which he, and other business people, go into inner-city DC schools to teach basic survival skills, provide job interview tips, and offer encouragement to stay in school.

From Polyfab’s humble beginnings in Al Parker’s garage back in 1987, Polyfab has grown into a company that has built strategic alliances that now can offer multiple fabrication and distribution facilities across the United States.  Polyfab has expanded its capabilities to incorporate wood, metal, and wire fixtures as well as services such as digital printing, intricate CNC machining, laser cutting, drape forming, and interactive displays.

If your company is looking for a responsible, responsive diverse supplier for your next project, we encourage you to contact us by email at info@polyfab-display.com, or by calling 703-497-4577.